Typecast by Andrea J. Stein: Settled back in her home town, granted 7 or so years ago, Callie 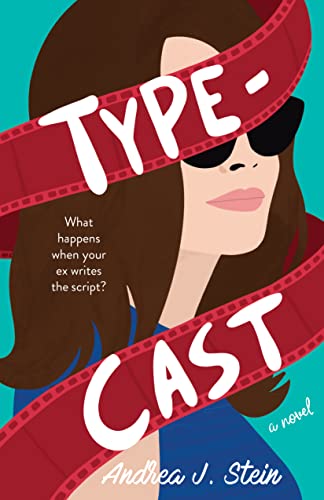 definitely has mixed feelings about her A type personality sister Nina and family moving in whilst their house undergoes some renovation work. Feeling pretty comfortable in her job as a Pre-School Teacher, it isn’t until a box office film is being release, written by her ex, literally capturing her past that Callie needs to figure out her next bold move. Delivered through a type of time flash narrative of before and after, it is clear that Callie’s heart needs tending to, and the movie she’s hearing about everywhere that she allegedly stars in, is a fresh reminder that closure is critical in finding the doors to move on.

Throughout, Callie was a fairly stoic character who had the type of calm that the majority envy. Navigating her life in a semi-adolescent dream (at least according to her sister Nina) we travel the day to day grind to get an almost over developed sense that she hasn’t moved on since her first love.

Interestingly though was a flip in typical romance break up, inasmuch as Callie announced the break up and proceeded to block Californian Ex Ethan out of her life. Irrespective, it is clear not moving on is a recipe for disaster. More-so though, is the sense that everyone finds their feet and their own natural rhythm when resolving matters of the heart.

Whilst aspects of the side characters were fairly two dimension; high achieving needy pregnant sister, her husband who is rarely available for anything other than some obscure demands, a niece that captures the imagination and friends who encourage Callie to be herself and put her heart out there again, there were a bunch of highs and lows about each. And while everyone is hell-bent on Callie moving on, she knows herself well enough to appreciate the power of change, and also finds the capacity to feel like she deserves to be loved again.

Overall, whilst a quick easy, fairly no-frill read, Typecast had a few good lessons we could all take stock from. Sometimes what we need is right in front of us and it doesn’t bare to rush the things that matter because love will always have its day.

Callie Dressler thought she’d put her past where it belonged—behind her. But when her ex-boyfriend brings their breakup to the big screen, she can no longer deny that their history has been looming over her all along.

At thirty-one, Callie Dressler is finally comfortable in her own skin. She loves her job as a preschool teacher, and although living in her vacant childhood home isn’t necessarily what dreams are made of, the space is something she never could have afforded if she’d stayed in New York City. She knows her well-ordered life will be upended when her type A, pregnant sister, Nina; adorable four-year-old niece; and workaholic brother-in-law move in, but how could she say no when they needed a place to crash during their remodel? As Nina pointed out, it’s still their parents’ house, even if their mom and dad have relocated.

As if adjusting to this new living situation isn’t enough, the universe sends Callie another wrinkle: her college boyfriend—who Callie dumped ten years earlier for reasons known only to her—has a film coming out, and the screenplay is based on their real-life breakup. While the movie consumes her thoughts, Callie can’t help wondering if Nina and her friends are right that she hasn’t moved on. When a complication with Nina’s pregnancy brings Callie in close contact with Nina’s smart and funny architect, Callie realizes she’d better figure out whether she wants to open the door to the past—or risk missing out on her future.

« REVIEW: Pieces of a Life by Jewel E. Ann
Spotlight & Giveaway: That Ship Has Sailed by HM Thomas »
Comments are closed.